Treasure Of The Four Crowns For Your Old School Horror Campaign

Warning The Following Film is Beyond Terrible. Its Trashastic!

Major Spoilers ahead.
A group of adventurers are gathered together to retrieve some mystical gems which are in the possession of a deadly cult.
There are some films that are beyond the norm and this is one of those. Treasure of the Four Crowns was one of those Saturday afternoon HBO films that showed so often in the 80's. It is also one of the most successful Call of Cthulhu game campaigns I've run to date.

The Plot according to Wiki :

The movie follows J.T. Striker, a Soldier of Fortune (Tony Anthony), who has been hired to assemble a group of professional thieves to retrieve the gems which are hidden inside two of the remaining four Mystical Crowns. Striker braves a mysterious magical cave  (Castle MegaDungeon) in which skeletons and spears appear and jump out at him. He discovers a scroll in one of the crowns in the cave, which tells him that the fourth crown had disappeared long ago. He denies that the gems are magical or even valuable. He succumbs to the belief eventually and sets off to find the last two crowns, which are being held inside a heavily guarded compound that is the home of a cult led by the evil Brother Jonas. Striker's team suffers casualties from booby traps as it performs a dangerous acrobatic commando raid on the room where the crowns are kept. Striker retrieves the gems from the two magical crowns, and the magic makes his head literally spin. His face becomes half deformed, like that of Two-Face. Striker shoots fire from his fingers, melting the henchmen, their weapons, and Jonas. After, the film cuts to a shot of a boggy swamp, where a large pile of slimy brown sludge rises from the swampy water. A head like that of a moray eel with crystal blue eyes shoots towards the screen for a 3-D effect, setting up for a sequel that never happened.

The name J.T .Striker  should be recorded right along with the names of Indiana Jones and Lora Croft for tomb desecration. Instead after the affair of the Four Crowns J.T. has retired from active adventuring. His legacy lives on though.

In 1980 J.T. Striker penetrated a haunted castle on the edge of Spain. The abode of ancient heretical king and his knights who were slaughtered at the end of the crusades by the Moors. The violence of this slaughter wretched the castle from the plane of existence to become a bauble of the forces of Hell.
The sole reason for this mission was the recovery of the Key of the Crowns. A relic possessing a malevolent consciousness,telekinetic abilities as well as the spirit of the king himself.
This key was locked within the of the head of this king's scepter.
After surviving nearly being killed by the booby traps of the castle and several animal encounters.
The Key was finally brought back to Rome where the Scroll containing an account relating the existence of the main crowns and the jewels they contain was finally released from the third crown.
The scroll also related the tale of the Heretical King who sold his soul to Urogothag The Undying The Twin Headed Progeny of  Orcus.

The evil Brother Jonas and his cult have been using the power of the crowns and Urogothag The Undying The Twin Headed Progeny of  Orcus to create a world spanning cult. Urogothag The Undying has an earthly manifestation  a statue of itself with a vast array of deadly booby traps just waiting to take out a party.
And what of the crowns?  There two jewels held within the crowns each representing good and evil. Actually they represent order and chaos and are bubbles of divinity put upon this Earth by the Ancient Ones. 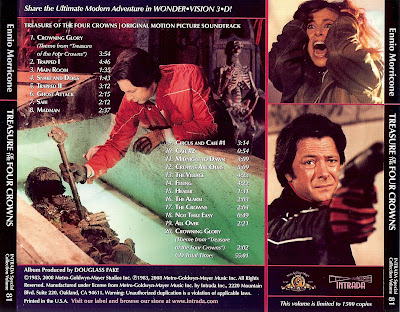 The demon manifested twice more. Once through a cult in Colon and a heretical sect in France both off shoots of the cult of Brother Jonas. The ruins of Jonas's Mountain of Power still stands to this day. His spirit is still said to haunt its halls. Waiting for something that may never come.
Commentary

There are terrible movies and then Treasures comes along. The way that J.T. Striker assembles his team is classic. The fact that most of them except the "old flame" perishes is great and so typical of a CoC game.
Treasure is almost completely unknown to the general public making this a great go to set up game. I've run this one as a one shot at several cons and the reaction was great. This makes a great alternative to the usual mythos laden games.
I've used JT's and Liz's son whose now in his late 40's as another adventurer NPC or patron in several Call of Cthulhu games. J.T. has appeared as a jaded world weary patron to several of Larry's players in various Call of Cthulhu games.
Were there other adventures of J.T. Striker in the 60's and 70's? Has he run across the forces of Hell before?
Could the various locations used in Treasures be lost in the illusion ala Kult's cosmology? Are there other such places just waiting for adventurers to stumble upon them? Ordinary people who become caught up in the machinations of Hell and worse? Could there be others now searching for the original creators of the jewels that the crowns once held? Who has the crowns now?
What of the first castle that J.T. visits to recover the key. Who was the King and his knights. Could there be a quest for your OD&D group? A mission to put those bastards down before the Earth is plunged into the heart of  Hell by the power of the crowns?

What of the cult of Unogothag's brood? Had his birth and reign within Hell caused upheaval of Biblical circumstances? How did he come to control the power of the crowns?
Happy playing.
Posted by Needles at 9:02 PM