In case you've been living under a rock today is the day that Dr.No was unleashed on the world. October 5th marks the date when this vicious little movie made its way into the world.
The world has never quite been the same..

I've always considered Dr. No as the traditional Bond movie. All of the elements are there of course. The guns, the girls, the gadgets, & the movie delivers the goods.
Major plot spoiler ahead
The plot goes something like this  according to wiki:
"John Strangways, the British Intelligence (SIS) Station Chief in Jamaica, is ambushed and killed, and his body taken by a trio of assassins known as the "Three Blind Mice". In response, MI6 agent James Bond—also known as 007—is summoned to the office of his superior, M. Bond is briefed to investigate Strangways' disappearance and to determine whether it is related to his cooperation with the American Central Intelligence Agency (CIA) on a case involving the disruption of Cape Canaveral rocket launches by radio jamming.
Upon his arrival at Kingston Airport, a female photographer tries to take Bond's picture and he is shadowed from the airport by two men. He is picked up by a chauffeur, whom Bond determines to be an enemy agent. Bond instructs him to leave the main road and, after a brief fight, Bond starts to interrogate the driver, who then kills himself with a cyanide-embedded cigarette.
During his investigation in Strangways' house Bond sees a photograph of a boatman with Strangways. Bond locates the boatman, named Quarrel, but finds him to be un-cooperative. Bond also recognises Quarrel to have been the driver of the car that followed him from the airport. Bond follows Quarrel and is about to be beaten by him and a friend when the fight is interrupted by the second man who followed Bond from the airport: he reveals himself to be CIA agent Felix Leiter and explains that not only are the two agents on the same mission but also that Quarrel is helping Leiter. The CIA has traced the mysterious radio jamming of American rockets to the vicinity of Jamaica, but aerial photography cannot determine the exact location of its origin. Quarrel reveals that he has been guiding Strangways around the nearby islands to collect mineral samples. He also talks about the reclusive Dr. No, who owns the island of Crab Key, on which there is a bauxite mine: the island and mine are rigorously protected against trespassers by an armed security force and radar.
During a search of Strangways' house, Bond found a receipt, signed by Professor R. J. Dent, concerning rock samples. Bond meets with Dent who says he assayed the samples for Strangways and determined them to be ordinary rocks. This visit makes Dent wary and he takes a boat to Crab Key where Dr. No expresses displeasure at Dent's failure to kill Bond and orders him to try again, this time with a tarantula. Bond survives and after a final attempt on his life, sets a trap for Dent, whom he captures, interrogates and then kills.
Having detected radioactive traces in Quarrel's boat, where Strangways' mineral samples had been, Bond convinces a reluctant Quarrel to take him to Crab Key. There Bond meets the beautiful Honey Ryder, dressed only in a white bikini, who is collecting shells. At first she is suspicious of Bond but soon decides to help him, leading them all inland to an open swamp. After nightfall they are attacked by the legendary "dragon" of Crab Key which turns out to be a flame-throwing armoured tractor. In the resulting gun battle, Quarrel is incinerated by the flame-thrower whilst Bond and Honey are taken prisoner. Bond and Honey are decontaminated and taken to quarters before being drugged.
Upon waking they are escorted to dine with Dr. No. He reveals that he is a member of SPECTRE (SPecial Executive for Counter-intelligence, Terrorism, Revenge, and Extortion) and plans to disrupt the Project Mercury space launch from Cape Canaveral with his atomic-powered radio beam. After dinner Honey is taken away and Bond is beaten by the guards.
Bond is imprisoned in a holding cell but manages to escape through a vent. Disguised as a worker, Bond finds his way to the control centre, a multi-level room full of high-tech instrumentation with an atomic reactor set into the floor, overseen by Dr. No from a command console. Bond overloads the nuclear reactor just as the American rocket is about to take off. Hand-to-hand combat ensues between Bond and Dr. No; the scientist is pushed into the reactor's cooling vat, in which he boils to death. Bond finds Honey and the two escape in a boat just as the entire lair explodes."
A Brief Mention of The James Bond Rpg Victory Games Adventure 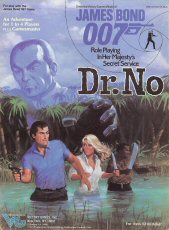 "BRIEFING: Something is terribly wrong on the island paradise of Jamaica. The always reliable M.I.6 Station head has failed to make his report and has since disappeared. What terrible secret is so important on Jamaica it is worth the risk of murdering an M.I.6 operative? All clues point to the existence of a mysterious figure unknown to the British Secret Service - someone called Dr. No. Where is Dr. No located, and could he prove a threat to the rest of the world?

MISSION: Against the backdrop of romance and intrigue in the Caribbean, you must discover the link between the missing Station head and Dr. No. Though your assignment sounds simple enough, you will find yourself in constant jeopardy as you seek to separate the lies and legends from the truth about Dr. No. Do you have the courage - and the intelligence - to unravel the mystery of Dr. No?

The Dr. No Adventure package contains:
• An illustrated 48-page Gamesmaster's Guide with complete instructions on running an adventure.
• An Agent's Briefing Dossier from M.I.6 with 8 Mission Sheets that provide clues and maps for the players.
• A stand-up screen containing a map of Jamaica and the floorplan to Dr. No's lair."
1984 ... VG 35006 ... ISBN 0912515066
Notice I said seems to. This is one of the essential James Bond Rpg adventures but with a little work could be used with Top Secret or Mercenaries, Spies, & Private Eyes. Yes the gadgets, the girls, & the guns are all there but this is a slightly different adventure then the movie. It takes a bit of a different tract & if you assume this is the movie your PCs are dead meat. The factors are there from the movie as well.

The Dr. No Nuclear Disaster

This is the part that's always bothered me. " Bond finds Honey and the two escape in a boat just as the entire lair explodes."  The lair with a nuclear reactor explodes right in the middle of  the  Jamaican Islands  & Bond escapes..Quite possibly the worst nuclear disaster related to the Western world up till that time. Had this event been real it would have quite possibly altered our history. Fortunately this was a movie. There's a quite a few ways of diverging many rpg threads from the movie.


If we were to assume for a moment that  Win Scott Eckert is right &  "Who's Going to Take Over the World When I'm Gone?" is correct & that in "Myths for the Modern Age: Philip José Farmer's Wold Newton Universe (Win Scott Eckert, ed., MonkeyBrain Books, 2005), Win Scott Eckert contributes "Who's Going to Take Over the World When I'm Gone?" wherein he posits that No's mother was an agent of Fu Manchu named Madame de Medici, who was in turn the daughter of Fu Xi, from Sax Rohmer's novel The Golden Scorpion. Then there's all kinds of possible relatives in the No family. The No family might provide patrons, villains, & even gasp other PCs.
Or that  Likewise in The League of Extraordinary Gentlemen: Black Dossier, No is stated as being a distant relative of Fu Manchu. Later in the book, it is revealed that Bond's mission to stop Dr. No was a fraud, an alibi for Bond to kill a British leader for the Americans — "There was No Doctor."  Are both valid the possibilities for a game such as Kult, Top Secret, Mercenaries, Spies, & Private Eyes. The options here are pretty endless to see behind the curtain of a  game of  high adventure espionage.
Here nothing is as it seems & there are endless mirrors simply waiting to be explored & fun house conspiracies just around the corner. Here the ruins of Crab Key hold more then any adventurer of  horror or otherwise  might be bargaining for.

This is the world of both Johnny Quest & The Man From Uncle all of these might be part of the same world spanning organization.  We'll explore that tomorrow in part II of this article The Many Masks of James Bond. Tomorrow down the rabbit hole into the worlds of mazes, conspiracy, the TSR Top Secret game, & more Bond as well as Marvel's Shield