You can read about my previous thoughts putting this setting together right over  The first part is right HERE  and the last part  HERE
Nothing in this post is original at all. This is my fourth thought experiment involving this Grind House Torg style world. I began a few weeks ago to think about a post from the Hill Canton Blog. Way back on Monday, March 7, 2011 there was a blog entry concerning a seldom talked about corner of the Empire of the Petal Throne rpg.
"ca. 111, 912 AD Tékumel thrown into pocket dimension, the Time of Darkness. The same fate befalls 722 other worlds in Humanspace."
Hill Cantons threw in this little qoute -
"It must be assumed that Tekumel and its solar system fell--or were thrust--through a warp in the fabric of space-time itself, a "hole in the sky," into a pocket dimension in which no other matter existed. The reasons for this terrible calamity can only be guessed: natural forces, stresses created by the incessant use of the Three Light Drive, the actions of a hostile race, interference from mighty inter-dimensional beings far beyond man and his allies on the evolutionary scale, the vengeance of God upon His arrogant and overweening Creation? No one knows. It may only be noted in passing that this same fate befell 772 other worlds of Humanspace within a century after the disappearance of Tekumel and its system."
You can read the whole thing right Here  Then there was the whole taking the Empire of the Petal Throne rules minus the setting that Mike D over at the +1 Sword blog had done a Tekumel-less system. You can read about that right HERE
The idea here might be that these aren't quite the huge dimensional raiders but more of a mid level and above game. The idea that each of the pocket universes are collections of realms.

The world is invaded by various realms each controlled by a Highlord Dimensional Warlord.  First this is going to be a grind house version of Torg. In other words "B" movie versions of the standard rpg trope worlds. The worlds have changed slightly.

Cross dimensional adventurers going at it balls to the walls against inter dimensional invader warlords and their minions. Yeah that sounds great but by this time the characters are going to be looking for a challenge and adding in some of the elements of Empire of the Petal Throne might help. See there's the game within the game. Here are some of the elements I'm talking about.
This brings me to Warriors of The Wastelands.Back in the ancient days of the 90's when I was working in the video store. Post apocalyptic movies were always on rotation especially really bad Italian films. 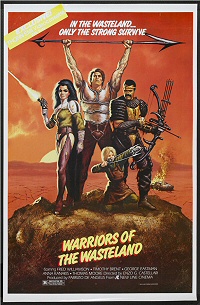 Rugged individualist in a post-apocalypse world comes into conflict with bad guys when he sides with their victims. Easily recognized Road Warrior rip-off, but almost forgivable due to the Italian movie traditions of sword-and-sandal stories and westerns. The Plot according to Wiki : In the year 2019, after a nuclear war, humanity is reduced to a few starving groups. A ruthless gang called "The Templars" constantly raid settlers in an attempt to exterminate everyone in order to purge the Earth. A former Templar, Scorpion, along with his allies, prevents a small band of religious colonists from being massacred by the Templars

The idea here being that this is a blank slate of a post apocalyptic world. You can easily add your favorite science fiction or science fantasy elements with little problem. Because of the pocket universe element from Empire there is quite a bit of room to incorporate this as a mid level game. This allows anything from the creations of Hargrave to the Shen to show up.
The "Templars" might well be another faction of a minor alien sorcerer or demonic entity. Add in your favorite post apocalyptic menace and this could become a domain game as the characters begin to raise in levels.  This style of game is going to take place out on the  West Coast - post apocalyptic world of Mutant Future/Metamorphosis Alpha. A "Road Warrior style world" think 80's television like Airwolf, The Highway man, etc.  where the United States Police Force barely maintains control.  I'm placing most of this in or near Vegas.

The Templars have appeared in a number of my games as good guys, bad guys, and folks caught smack in the middle of demonic activity  that cause loss of life and limb.

This brings us to Carburetor City by FishWife games and this is the perfect little post acapyptic "High Way Of Hell" Style world for this world. Every party needs a place to operate from and this is a great place to do so. Weighing in at only five pages this little product allows a DM to customize a Post Apocalyptic Town of their own. Here's the description according to Drivethrurpg
Located within the ruined wastes of a metro area once known for its casinos and nightlife, Carburetor City is a twisted, post apocalyptic reminder of the local area's past history of good times and seedy decadence. The city is run by a council of four residents that consists of Mayor Jack Kilgore, Sheriff Taylor Mason, Pastor Miles Gordon, casino owner and local celebrity Dee-Jay Splendor. The sheriff and the good pastor tend to represent the community's struggling virtues of morality and order while the local dee-jay and casino owner promote the city's prosperous delivery of entertainment and decadence. Although the mayor's position is technically seen as being a neutral tie-breaker between the city's two struggling sides, it is well known that the community's mayor usually panders to the interests of the community's seedier prospects.

In many ways, Carburetor City is like a dream come true for most post apocalyptic survivors. With the majority of its territory nestled within the safety of bricked walls and razor wired metal fences, those living within the confines are at least safe from the ravages of the wasted ruins. The city has an operating radio station that broadcasts its transmissions across a number of frequencies, thus attracting the business of civil traders and wandering nomads for many miles around. Solar panels, automotive batteries, and experimental mini-power generators provide electricity for the population. Water is collected regularly in the two metal water towers in the community's confines. The tanker trucks used by the scavengers often return with a decent enough supply of recovered fuel, allowing the community's vehicles the chance to keep running. Although food remains a constant concern, gambling at the casino and a brisk trade in the recovered goods from the surrounding metropolitan ruins provides a chance to gain such needed resources from traveling peddlers. For those needing wheels, recovered automobiles, salvaged parts, tires, and mechanic work is also available for a price.
Page Count: 5 Pages (Includes cover, information, and blown up map pages)
Designed By: Dave Woodrum
You can get it right HERE  for one dollar .Carburetor City is perfect for just this sort of game. A way station, pawn spot, and oasis for a price in the middle of a desert that sees more then simply artifacts and the like.
If this place is near Vegas then it might also be doing a brisk trade in Mexican/South American "Empire of The Petal Throne" technology and relics.
I've been toying with the idea of casino owner and local celebrity Dee-Jay Splendor being a resource for some of the information for things happening down in Mexico and South America.
Happy Gaming
Next Up
Adventurers Of The Time Streams
Posted by Needles at 10:38 PM