If your looking for an adventure with gnomes, high weirdness, a great sense of humor, and plenty of room for customization. The Gnomes of Levnec might just be for your party of warriors, wizards, and adventurers.
Grab It Right
HERE I went to Zzarchov Kowolski with one thing on my mind, gnomes. This adventure incorporates gnomes but not in the traditional sense but in the weird humor of old school gaming. The Gnomes of Levnec is one part outdoor adventure, two part dungeon crawl, and a whole little mini sand box of gaming adventuring with a twisted humor slant to it. I don't mean that this is a jokey unplayable adventure, rather its a twisted romp with a wry and twistedly strange sense of humor about itself. Levnec is actually a very interesting little setting, with the slightly familiar and the oddly twisted existing side by side. Your adventurers are thrust right into the deep end of the adventure. And the adventure is well worth the money, this adventure would make an excellent and more then slightly twisted adventure to run with OD&D, Swords & Wizardry, or Lamentations of The Flame Princess. In point of fact I love to run this adventure as a low level introduction to the world of Lamentations of the Flame Princess. In only sixteen pages the author establishes the setting, adds in a number of interesting NPC's within the adventure locations, adds a real plot with some minor hooks for adventure continuation, and ties it together with a witty yet interesting device or two.
There are some nifty random tables in this adventure that add to weirdness factor of piece without taking your PC's out of what's going on. This adventure knocks the traditional out door adventure on its ass and does it with style. A style that has a unique view point on gnomes, spells, magick, and a ton of weirdness at its heart. And uses these elements with a sense of the morbid and strange. But it does it in a completely awesome way. Repeatedly!
If your expecting hack and slash dungeon crawl fest, this adventure isn't for you. If you want an adventure with plenty of DYI old school OD&D adventure with plenty of Twin Peaks style high weirdness this might be the adventure for you.
This adventure has some nice maps, great diagrams, and I love, love, the art in the adventure piece because it suits the adventure rather nicely and set's the tone for this darkly whimsical adventure.
The Gnomes of Levnec provides the DM with a handful of locations in the village, and there's plenty of room to add more in except for the gnomes are waiting to screw with adventurers. And yet they're still more going on then is hinted in the general outlay of this adventure. In fact the plot will have your adventurers crawling around the woods in no time flat and getting lost. In fact their's a rather nifty random table for that. The adventure is going to take PC's into the woods, twist their perceptions around, and then leave them feeling more then slightly disturbed. This is a perfect adventure for a short set campaign adventure that can be dropped right into the background of an existing campaign and yet leave the PC's feeling rather particular about the gnomes that are featured. Which in my book is a good thing. Five out of five because this adventure ticks so many boxes. Dark and more then slightly twisted, great maps, easy set up, deployment ,and a great weekend adventure to keep the PC's weirded out and more then slightly disturbed.  This adventure is a five out of five in my book.

Using The Gnomes Of Levnec
With Your Old School Campaigns

This isn't my first romp with Zzarchov Kowolski and I've read through his Pale Lady adventure which is a killer effort for the Lamentations of The Flame Princess rpg system. The Gnomes of Levnec isn't even in the same ball park as the latter adventure but the element of the mythological weird is none the less right there in this adventure. A sense that the 'unreal' of the fairy tales of old is right in your face screaming at you. 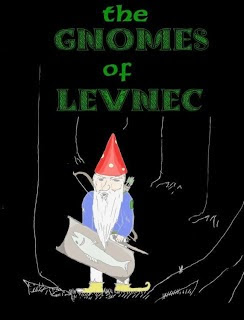 Levenec might be used with the Pale Lady in a neighboring valley or other isolated spot along some of the trails. The idea that the truth behind the myths and legends is even weirder then we're expecting or want to know about.