Welcome to Encounters, the fourth volume of the highly-anticipated Swords of Kos Fantasy Campaign Setting! This book contains 17 system-free encounter tables for general and specific areas on the island of Kos and the lands surrounding it. All of them can be used either individually or in conjunction with each another, and within the context of the Kos campaign setting or as part of any other milieu. It follows Kos City and Lands Beyond Kos and is fully compatible with and expands upon concepts that appear in them.
The Swords of Kos Fantasy Campaign Setting has deliberately been designed to be system free, not tied to any particular game setting, and to be compatible with any set of role-playing game rules suitable for ancient, medieval, or fantasy venues. In that the setting was used as the playtest backdrop for games using the OGL/d20, Pathfinder, “Basic” Dungeons & Dragons and Labyrinth Lord retroclone, and Advanced Dungeons & Dragons rules, of course, it is an especially ideal setting for them.


We've got an interesting part of the Sword of Kos fantasy campaign from the Skirmisher publications folks. This is a pretty interesting little supplement and its pretty solidly system neutral with some original ideas in its eighty eight pages of material. Much of the material here is specific in some ways to the Kos setting.

What Is The Kos Campaign Setting?
I've been following the Kos Kickstarter and Skirmisher's efforts for some time. As a fan of both Greek Mythology and Skirmisher Publications this was pretty much a no brainer.
They've gone to town on the setting with very game neutral books and instead concentrating on the setting material as well as the world. 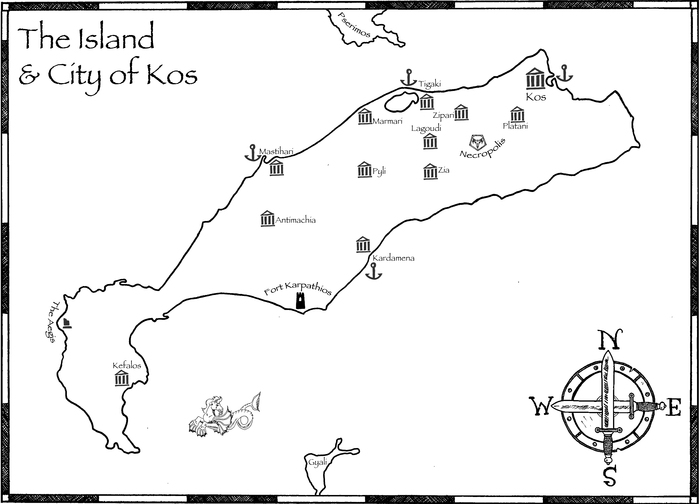 According to the campaign setting Kickstarter:


At the heart of this setting is the City and Island of Kos, located in the southeastern quarter of the wine-dark Aegean Sea. Although devastated by the volcanic cataclysm that blew apart the nearby island of Thera and threw the world into chaos a century earlier, Kos has since enjoyed a cultural and economic resurgence. Its main geographic characteristics are broad plains, arid hills, and a deepwater harbor along its eastern edge near the straits that separate the island from mainland Anatolia, just two-and-half miles away. Kos city is a metropolis located on this harbor and is home to innumerable merchants, rogues, adventurers, thieves, mercenaries, harlots, hedge wizards, cultists, and other transients. It is dedicated to the god Hermes and committed to commerce. It is also more tolerant than many other Hellenic cities of the resurgent trend toward devotion to the pre-Olympian Titans.
Here's the Kickstarter for the Kos fantasy campaign setting HERE
Much of the eighty eight pages of the Encounters book takes this campaign material and builds as well as expands it. This could be a traditional  D&D fantasy setting or with very little work this material could be turned into a solid sword and sorcery setting with little issue. The book is very well done. There is however a very solid Greek mythology feel to the Kos setting as you can see. Encounters takes that setting and expands upon it.
The setting is playable with a number of systems and with  a bit of work it could be used as a solid sword and sorcery addition to a campaign world. Because of the isle nature of the setting and its expansions as well as encounter this book is easily dropped into the background of your favorite fantasy world.
All in all I was pretty impressed with the Encounters book a solid read from beginning to end.
Posted by Needles at 6:51 AM